The bulk of the 2007 Châteauneuf du Pape reds from France’s Southern Rhône Valley are now arriving, and the vintage is a hedonist’s dream, offering opulent fruit and inviting textures. Most of the wines will have the stuffing to last past that, but this vintage is not at all like 2005, a year loaded with cellar-worthy backbone.

Yes, a few wines teeter on jammy and only the top tier display the full range of terroir-driven notes of iron,loam, graphite and more that Châteauneuf can offer, instead, the 2007 vintage is all about fruit, plum, raspberry and fig- with remarkably silky textures that belie the sometimes heady power and alcohol of these wines.

Fresh and forward, with rounded texture and slightly jammy notes of plum, fig and blackberry fruit laid softly over a mineral streak. Open and juicy through the finish, picking up blueberry and fruitcake hints that balance the forward fruit. Drink now through 2019.- JM Stirring the Lees with James Molesworth


Across the street is

Domaine de Beaurenard, where some of the good old boys of the appellation, brothers Daniel and Frédéric Coulon produce both superb red and white bottlings. Previous cellar note entries can be found here and here for this domaine, which combines old fashion hard work (some parcels are still plowed by horse) with a dash of modernity (some new oak) to create distinctive wines.

Two overlooked bottlings are the domaine’s Côtes du Rhône-Villages Rasteau 2007 and Côtes du Rhône-Villages Rasteau Cuvée Les Argiles Bleues 2007. The former, a blend of 80 percent Grenache with Syrah, shows delightful blueberry and raspberry fruit, with a fresh, spice box-filled finish. The latter (made from the same 80/20 Grenache/Syrah mix) is sourced from 45-year-old vines on blue clay soils and delivers its typical blueberry cobbler aroma, along with Linzer torte, cocoa and graphite notes and a long, stylish finish. Both are potentially outstanding.

The Châteauneuf-du-Pape 2007 has been blended and is awaiting its mis. It’s fine-grained and elegant for the vintage, with red, black and purple fruits laid over a mouthwatering graphite note. The Châteauneuf-du-Pape Boisrenard 2007 is the domaine’s top cuvée, sourced from the Coulons' oldest vines. The blend has almost been finalized and is slated to be bottled in May. It shows the flashy spice and inviting mocha aromatics it’s known for, but it has already completely absorbed its oak (it is aged in barrel, 20 percent of which is new oak).

“The ’07 married with the oak right away,” said Frédéric.

The wine shows gorgeous mouthfeel, along with Turkish coffee, date bread, currant paste and warm fig sauce notes. It should rival the estate’s sublime 2001 for top honors in the history of the cuvée, which debuted in 1990.
Partager cet article
Repost0

2007 – Throughout the southern Rhône, 2007 is the greatest vintage I have tasted in my thirty years working in that region. In a future issue, my enthusiastic notes about Gigondas, Vacqueras, and the other Côtes du Rhônes will be published. Nearly every producer has attained largely unprecedented levels of quality. Moreover, the vintage is remarkably consistent from top ti bottom.

As for Châteauneuf du Ppape, that appellation has had an unprecedented succession of superlative vintages. Forgetting the historic washout in 2002, every vintage between 1998 and 2007 has had both high quality and something different to offer stylistically. Where does 2007 fit. Think of 2007 as a hypothetical blend of an opulent, powerful, sumptuous years such as 1990, and a cooler drought vintage such as 2001. The cool weather and the remarkable three weeks of Mistral in September that concentrated the grapes without any spikes of high heat appears to have given the 2007s an aromatic dimension and freshness that I have rarely witnessed.Combine that with wines that are substantial, powerful, and relatively high in alcohol, with super depth of fruit! These are very aromatic wines of great concentration, freshness, laser-like focus, and amazing purity as well as depth. It is the vintage of my lifetime for this region, and I don’t say that lightly. These 2007s will also be very long-lived given their extraordinary balance.

In terms of climate, it was a cooler than normal vintage, and Châteauneuf du Ppape experienced a severe drought between late spring and the end of september. This ,plus the three weeks of Mistral, and the lack of any heat spells concentrated the grapes to extraordinary levels, and also provided the remarkable aromatic profiles and stunning freshness and vibrancy found in the 2007s.

2006 -  As I indicated last years, this vintage has turned out significantly better than I had initially expected. It  is also an exceptional vintage for the white wines. The reds are fullbodieed, charming, and fruity, with relatively low acidity and ripe tannin. They are in total contrast to the behemoth, massive 2005s, but because of their terrific balance, immediate accessibility, purity, and superb aromatic profiles, this will be an underrated vintage, especially since it is stuck between the bigger, more muscular, masculine 2005s and the historic 2007s.The 2006s are fruit-forward and charming and the finest efforts are stunning. I believe they will age much longer than many people suspect given their intrinsic equilibrium/harmony.

One of the oldest estate bottlers of Châteauneuf du Pape, the Coulon family boasts an extraordinary track record of making wine. They were one of the first to offer a luxury cuvée, called Boisrenard.

Cinsault, and the rest various authorized varietals) spends time in both small barrel and foudre. The 2007 Châteauneuf du Pape exhibits pure black raspberry and sweet fruit along with a supple texture, medium to full body, and gorgeous purity as well as length. It will be a lovely wine to drink at a surprisingly early age for a Beaurenard. It should evolve for 10-12 years. The beefier, more modern-styled 2007 Chateauneuf du Pape Cuvée Boisrenard, which comes from 60 to 100 years old vines, is meant to represent a symphony of the 13 différent varietals permitted by law in this appellation. Dominated by grenache, it is aged 18 months in small barrels, most of them old. The full-bodied 2007 is extremely elegant (no doubt because of the coolness of the vintage), exhiblting a deep ruby/purple hue in addition to exquisite aromas of graphite, vanilla, blackberries, and blueberries. I have been purchasing this cuvée for many vintages, and with 8-10 years of cellaring, it becomes a classic Provençal and Châteauneuf du Pape offering. The 2007 should evolve for 15 or more years.

The dark ruby/plum-tinged 2006 Châteauneuf du Pape’s tarry, black currant-scented bouquet reveals notions of truffles and meaty/animal-like scents. Medium to full-bodied with good ripeness, an attractive texture, and spicy, heady finish, it can be consumed over the next 7-8 years.

The impressive 2006 Châteauneuf du Pape Boisrenard offers up aromas of black cherries, licorice, tar, earth, and spicy oak in the background. It is full-bodied and dense, with outstanding concentration, sweet but noticeable tannin, and plenty of spice and earth notes. Anticipated maturity : 2010-2024.

The 2007 Côtes du Rhône is a straightforward, pleasant, attractive effort offering loads of fruit, but not much complexity. Readers looking for more earth, chocolate, and berry fruit characteristics should check out the fuller, deeper, slightly more rustic, but also more interesting, personality-filled, dark ruby/purple-tinged 2007 Côtes du Rhône Villages Rasteau. A sleeper of the vintage (and usually one the fine of the finest wines from this appellation) is the 2007 Côtes du Rhône Villages Rasteau Argiles Bleus. This old vine Grenache from the appellation’s famous blue clay soils exhibits an inky/plum/purple color as well as a highly extracted nose of black fruits, earth, vitamins, and chocolate. Deep, fuul-bodled, powerful, and rich, this wine will benefit from 1-2 years of bottle age, and should keep for a minimum of 7-8 years. At the time of writing, Domaine de Beaurenard was in the process of changing importers, having lost nearly 250,000 euros when they were not plaid for the sale of their 2005s. This has a nice brawny undertow of chestnut and grilled beef, with top layers of dark fig, licorice and coffee. Solid flesh surrounds it all, and the finish is long and well-structured. Best from 2009 through 2023. 300 cases imported.—J.M

Gorgeous aromas of warm cocoa, mesquite and fig sauce are fol­lowed by a rich, silky palate that lets dark fruit, graphite, Turkish coffee and bittersweet cocoa run through the lengthy finish. This is not shy about its toast, but it’s well-integrated. Best from 2010 through 2028. From France. 60 cases imported —J.M. 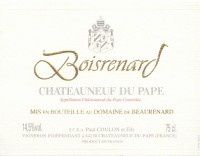 This has lots of juicy grip, with a strong, biary undertow supporting red and black licorice, hot stone currant paste, tobacco and chestnut notes. The long, muscular finish is typical of the vintage. Best from 2010 through 2025. 100 cases imported.

Offers a delicious mix of raspberry, blueberry and boysenberry fruit, all layered with sweet spice, incense and mineral notes. Almost flashy, but this is kept honest by the racy, graphite-tinged finish. Drink now through 2010.100 cases imported.

An open-knit, elegant style, with notes of raisin, plum, sandallwood and licorice root supported by tannins that are ample but round and supple.Drink now. 200 cases imported. 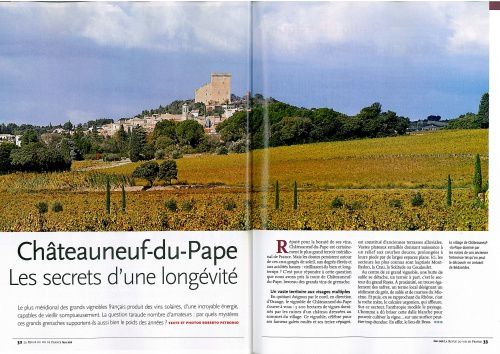