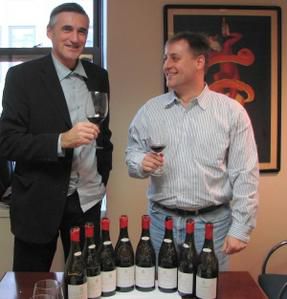 Brothers Frédéric and Daniel Coulon run the Paul Coulon & Fils estate in Châteauneuf-du-Pape (commonly referred to as Domaine de Beaurenard). I sat down with Frédéric in my office today—tempted by the vertical of the estate’s top red wine, their cuvée Boisrenard, that he brought. It also happened to be Frédéric’s first trip to the U.S. since the Chicago Wine Experience, when his estate’s 2001 vintage was represented in the Top 10 tasting.
I’ve learned quite a bit about Châteauneuf from the Coulons, who are very generous when it comes to opening older bottles. They’ve even poured their 1929 and 1967 for me on some of my visits to their domaine.

The Boisrenard cuvée, which draws its name from the old spelling of the Beau Renard parcel in Châteauneuf, is sourced from their oldest vine plots, including a parcel planted in 1902, which the brothers still work by horse-drawn plow instead of tractor.

The wine is more than 80 percent Grenache, with the remaining red varietals (Syrah, Mourvèdre, etc.) mixed in. The first commercially-released vintage was the 1990, though the Coulons had been vinifying their parcels separately since ’85, as they contemplated producing different cuvées. The wine is fermented in stainless steel, and then it is moved to a mix of foudres and barrels, some of which are new, for 18 months of aging.

The wine definitely has a modern bent to it from the touch of new oak influence, but it is a CdP through and through. The toast usually subsides after a year or two of bottle age and then, after some middle-aged tightness, the wine gets its second wind. Here are my notes from my tasting, which was not blind:

2003 Paul Coulon & Fils Châteauneuf-du-Pape Boisrenard
A total powerhouse—loaded to the gills with boysenberry, fig and currant fruit. Rich and smoky, with graphite, licorice, spice and sweet cocoa notes. Very muscular finish, which is starting to tighten up now. 97 points.

2001 Paul Coulon & Fils Châteauneuf-du-Pape Boisrenard
This vintage has always been a stellar one at chez Coulon. Frédéric says he remembers the vintage well, as it was late—the Boisrenard parcels were picked in October, as opposed to the usual mid- to late-September. The wine is really flashy, still very primal, with lots of blueberry, mocha, fig paste, spice cake and milk chocolate notes. Gorgeous silky texture too, with a superlong finish. 96 points.

2000 Paul Coulon & Fils Châteauneuf-du-Pape Boisrenard
This was a big year in CdP, especially for Grenache—very ripe, powerful and alcoholic. And it shows in the wine, which is still just a touch tight, but is packed with blackberry, black currant, fig, truffle, game and tar notes. Brawny and muscular on the finish. 96 points.

1999 Paul Coulon & Fils Châteauneuf-du-Pape Boisrenard
While many of the CdPs from this vintage have generally stayed open and fresh, the ’99 Boisrenard is rather dark, with hints of hoisin sauce, truffle, tar and bacon backed by black currant and fig fruit notes. Lots of grip here, with a long, minerally finish. This is the first vintage where the change to secondary notes is becoming evident. 94 points.

1998 Paul Coulon & Fils Châteauneuf-du-Pape Boisrenard
An “easy” vintage, says Frédéric, which in wine speak means perfect weather and ideal ripening made it easy to make a great wine. This offers a gorgeous nose of fruitcake, toffee and truffle, with corrupt blackberry and fig notes and a note of bittersweet cocoa on the long, powerful finish. Still has a long way to go. A real monster of a wine. 98 points.

1995 Paul Coulon & Fils Châteauneuf-du-Pape Boisrenard
From a vintage that I’ve always thought has been underrated, this is one of the top wines. The beginning of the harvest was very warm, and it looked like it was going to be an early harvest. But as the Coulons were picking grapes in their Côtes du Rhône parcels (which typically ripen first), a cold, hard mistral blew through CdP for a week. By the time they got to the later-ripening parcels for the Boisrenard, the mistral had concentrated the grapes but preserved the acidity. The skins were thick in ’95, which is why the wines can be on the rugged side. But the top wines can also be like this, with really expressive aromas of hoisin sauce and chili, along with plum cake, truffle and floral notes. Supple midpalate, but lots of grip on the finish. 96 points.

1990 Paul Coulon & Fils Châteauneuf-du-Pape Boisrenard
The first vintage for the wine, and it is now fully mature. It shows a brickish hint of color but is still dark at the core, with aromas of braised beef, chestnuts and mesquite backed by supple dried currant fruit. Shows a sanguine edge to the long, minerally finish. Shows great aromatic lift on the finish, but a great bass line too. 98 points.

C
cleaning company dubai
07/11/2019 10:16
Office furniture like sofas gathers airborne debris and grime after a while and cleanup them is often a huge examination. You can depend upon a special housekeeping service to scrub these physical objects. These very same services in addition clean upholsteries and also other furnishings. Another job these solutions undertake can be controlling undesirable odors which might be the outcome of different pursuits. These services can even be employed pertaining to pest operations at households, offices, and many others. Pests cause immense problems inside offices. Exterminating these kind of using experts is a superb or sometimes sizzling hot out. These solutions also supply glass Cleanup Services pertaining to offices using massive cups mounted of their buildings.
Répondre